I’m flying back to Florida tomorrow, and it will be good to be home with Patricia, but I thought I’d take a little walk in my old neighborhood this afternoon. If you’re interested, click for more, but a warning that there are several pictures, for those limited in bandwidth…

The Santa Ana winds have been kicking up for the last few days, which is why they had the fire up in Ventura. Normally, people who live on Santa Monica Bay have pretty clear air because, like many other things, we import our air from Asia, and it has several thousand miles of ocean to cleanse it. But during the Santa Anas, the high pressure over the Great Basin shoves the air in the wrong direction, and we get off-shore winds. This breaks up the inversion layer in the LA basin and cleans out the air, but it shoves the whole miasma out over the bay, where it lies like a brown layer on a blue cake. You can see it in this picture of Catalina Island. 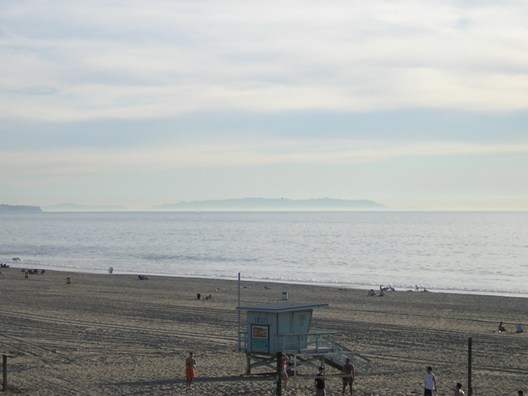 This is a view from the Strand (a walkway along the beach) in Manhattan beach, looking toward the southwest. Palos Verdes peninsula is to the left, and the island that looks like two islands is Catalina. You can see the smog layer in the isthmus in the center of the island, and in the bay off to the right of it. Looking off toward the north end of the bay, you can see the same effect off Point Dume, up by Malibu. 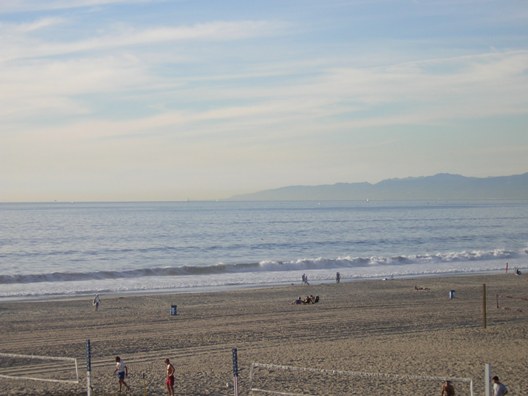 Of course, the key point is that the air is actually unusually clear on days like this inland (the views of the San Gabriel Mountains are gorgeous today), and even looking up the beach toward El Segundo power plant, the marina and Venice, all the way to downtown Santa Monica in the distance, a lot of detail can be seen in this shot from the Manhattan Pier, though the brown layer can still be seen above the Santa Monica mountains. 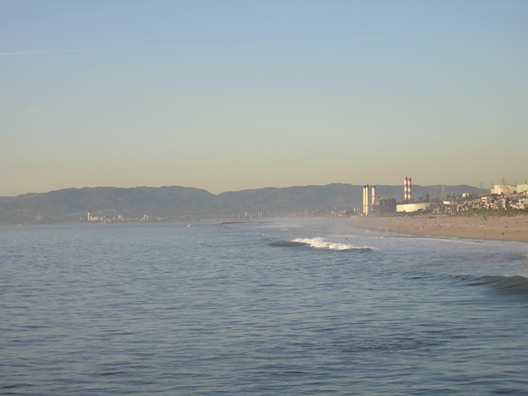 Often, a thick marine layer obscures and fuzzes this view, but the dry warm air provides more clarity. Once in a while you’ll get this kind of view on a clear day, with no smog at all, and those days are the classic ones that the photogs shoot to lure the tourists out here. They happen quite often in the winter, but then it’s usually too chilly to enjoy the beach (at least in terms of bathing suits). When it happens in the warmth of the spring or summer, it’s rare, but heaven.

Looking out from the pier, the water seemed to be calm enough for a shore dive, so I checked out the scene beneath the waves. 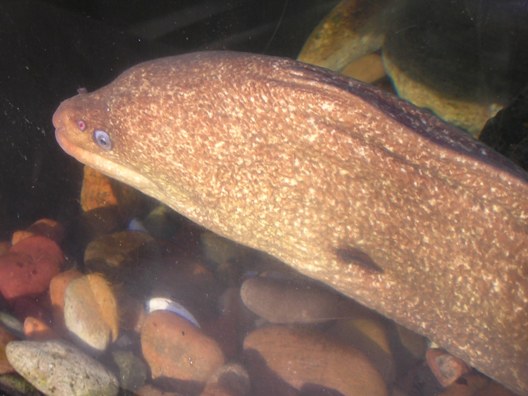 It’s actually a moray that lives in a little public aquarium out at the end of the pier.

When I first moved out here from Michigan, a quarter of a century ago, there were a lot of little beach houses along the Strand. Now, this is one of only a few left in Manhattan Beach (I suspect that they can be counted on one hand). 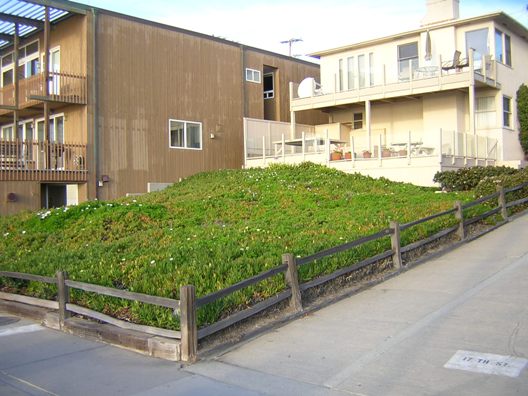 I don’t know how much the land is worth that the iceplant is covering, but I’m sure it’s in seven figures. Most of the houses along the Strand are built right up to the walkway. 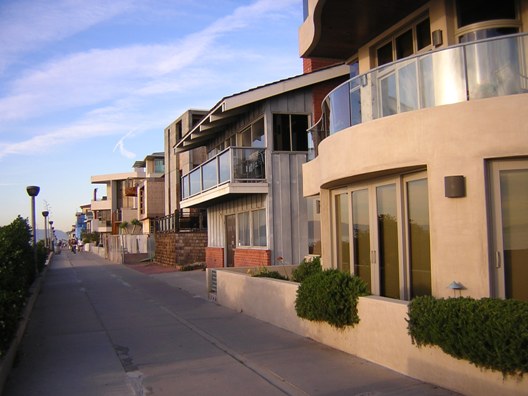 I should have bought property here when I first moved, but it’s not actually a place I’d like to live. Living right on the Strand is a fishbowl, and you have to be sort of an exhibitionist to do it, particularly in the summertime, with all the people parading right by your little yard, or more likely, front picture window.

Though, if I had, I could be renting out the place for a lot more than my mortgage. 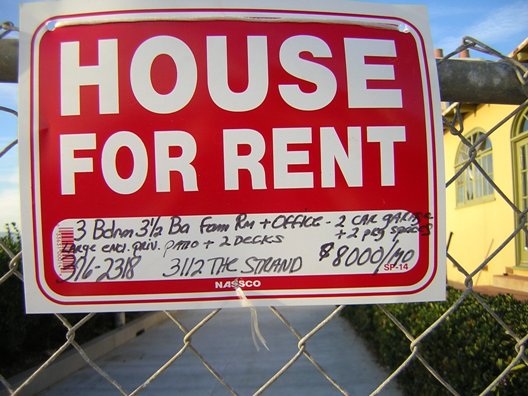 I don’t know how much longer that little patch of iceplant will hold out. I imagine that the owners are people who bought the land back in the forties, perhaps with the house, for a few thousand dollars, and it was just one of many, with a lot of empty lots. It’s probably been paid off for a long time, and their taxes are locked into the seventies era via Proposition 13. But when they die, it’s likely that their heirs will just sell the place to pay the inheritance taxes, or perhaps just to get the equity out of it. Some developer will pick it up, tear down the last of the old beach cottages, tear out the iceplant, and fill the lot with something more mansiony, like this. 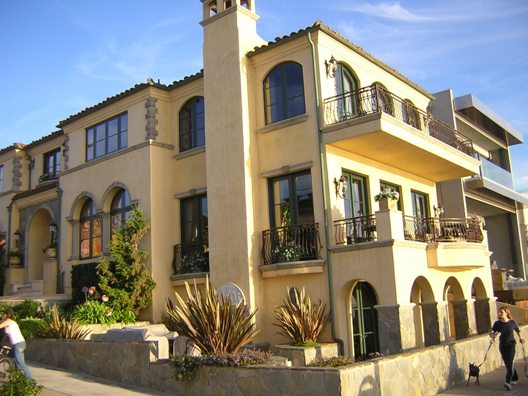 It’s not really the leaning tower of Manhattan Beach, or an earthquake–just a bad camera angle in an attempt to capture the whole thing without falling down the dune behind me.

The nice thing about the Strand is that there is a huge variety of architectural styles. It’s a very interesting walk if you want to see what the rich (and occasionally famous) are doing for domiciles these days. I’ve also noticed over the past few years as I watch the new construction that many of them have steel frames, rather than the wood frames that has been traditional in southern California. If I were building here, I’d do the same. The advantages are resistance to termites (any walk down the Strand will resemble a circus, with the occasional house tented to gas the little buggers out), and better resistance in a quake. That’s a particular problem here, because a major temblor is likely to liquify the sand underneath them.

Seeing all the change in the past twenty-five years makes me wonder what it will look like in 2030. They can’t build up, because there are height restrictions to preserve the views of the people on the hill above. I imagine that the creative destruction will simply continue, with the older places making way for the newer ones, and the prices continuing to escalate, because when they say in the real estate business that they’re not making any more land, this is the kind of place they have in mind.