We went over to the Holocaust Museum today. I’d never been, but never had much desire to — I’d read my fill of that history years ago. It’s not so much that I found it disturbing as simply a waste of time that I could spend looking at museums in which I was more interested. But Patricia wanted to, and one of the reasons that I love her is that she did, and so we did. As I expected, there was little unexpected for me in the permanent exhibit on the upper floors, but in the basement is space for temporary exhibits. One that opened a couple weeks ago (ten days after the White House had a new occupant, though I’m sure that was just a coincidence) was on Nazi propaganda. Now that, I found disturbing.

This is the image that greets you at the beginning of the display. 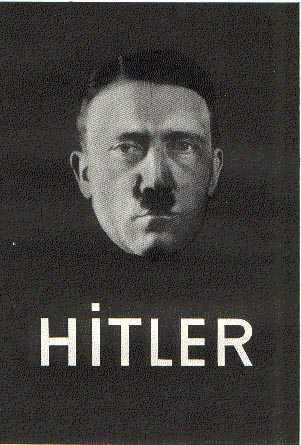 The placard that accompanied it said that one of the elements of convincing propaganda, to appeal to the masses, is a powerful image combined with a simple message. It helps even more, apparently, if it is done in the style of socialist realism, like this.

Farther on in the display, it discussed how Goebbels and the other Nazi propagandists were enamored of new communications technologies, using the gramophone as an example. If they were operating now, they would no doubt be fascinated by Web 2.0.

A few steps later, I came across the following striking quote, by a woman in Germany who had attended one of Hitler’s rallies:

How many look up to him with touching faith! As their helper, their saviour, their deliverer from unbearable distress…

I was so relieved that I live almost eighty years later, and that our society had grown beyond that kind of primitive thinking — that the president is responsible for the personal well-being of every citizen, and every sparrow that falls in America, like a demigod. I mean, obviously, any responsible leader today, confronted with such idolatry would use it as a teachable moment about the nature of our Republic, rather than basking in the worship, as Hitler did, to gather more raw unchecked political power unto himself.

I also found interesting the description of how the Nazi authorities encouraged and organized public rituals, ceremonies, meetings and other public events. I could see how this kind of activity might solidify public support behind otherwise less politically palatable notions felt important by the state.

Of course, one of the most disturbing tactics, used not only by the National Socialists, but also the fascistic international socialists in the Soviet Union, was the continual rewriting of history to glorify the state, and make it out to be the victim of past failures and treachery, and misguided policies. Some of the examples they gave were almost as though modern leaders were continually talking, fantastically, about how we got into our current economic problems through deregulation and tax cuts, and (non-existent) laissez-faire policies, rather than overspending and overregulation, and continuing government interference in the free market, often at the behest of corporations.

Finally, during the war, one of the hallmarks of the Nazi regime was to control the flow of information to the German citizenry. I hadn’t realized that they actually built specialized radios whose sensitivity was so weak that they could only pick up German government signals, but generally not overseas views (such as the BBC). They viewed clandestine listeners to foreign broadcasts as traitors to the state, undermining the war effort. I’m certainly glad we live in a nation where such attitudes would be odious, to both Congress and the President.

All in all, it was a relief to leave the museum, and walk back across the mall toward the White House, secure in the knowledge that such things could never occur here.

And try to figure out which chapter of the story we’re in.

The administration is no longer issuing denials on the Fairness Doctrine. I guess when the campaign did it last summer, it was, you know, “just words” to get elected.

But I’m sure they mean well. They just have to keep their options open in case some people don’t follow the leader’s sage advice to “not listen to Rush.”

What I find fascinating is how the BDS-afflicted had to doctor the photos of President Bush to push their conception of him as a fascist dictator, yet the Obama promoters did it to him with no apparent sense of the irony of what they were doing.

These folks seem to have had their sense of irony excised at birth.

52 thoughts on “A Trip To The Museum”